Dong Hoi has known and becomes a town for travellers since the Phong Nha Caves found in 1991. Dong Hoi city has a domestic airport and train station to help tourists reach Phong Nha more conveniently. Most tourists usually stopover in town by plane or train, then they will keep onwards to Phong Nha. Another way to get to Phong Nha is by bus, and people sometimes stay a night in Dong Hoi City because the city has well-developed, many built luxury beach resorts, and many entertainments. There are many adventures to investigate Phong Nha caves and peaceful mountainous countryside, and national parks. Hiking trails, mud bath, zipline cable to the dark cave, especially the four days of camping spots to Son Doong. Phong Nha located in the heart of the UNESCO-listed Phong Nha-Ke Bang National Park in Vietnam's Quang Binh province, Son Doong is one of the most captivating destinations that should be experienced in Southeast Asia. More people have stood on the summit of Mount Everest than have witnessed the surreal beauty inside these enormous chambers. Ho Khanh was first discovered in 1990, a local farmer seeking shelter from a passing storm in the jungle. He noticed clouds and the sound of an underground river gushing from a large hole in the limestone and reported his findings to the British Caving Research Association (BCRA), who were stationed in Phong Nha at the time. 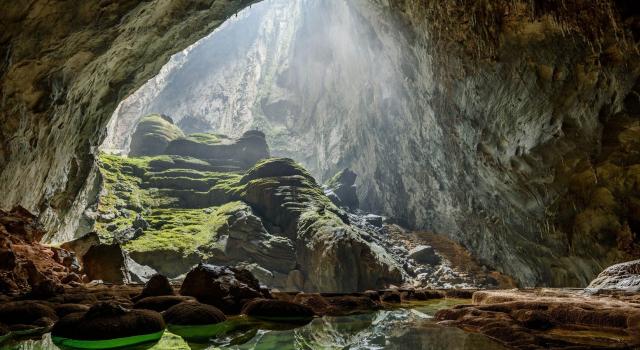